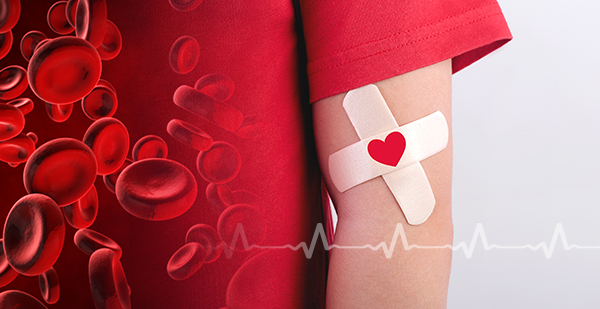 Every year, June 14th marks World Blood Donor Day (WBDD), initiated by the World Health Organization (WHO) to raise awareness around the critical need for life-saving blood. While selfless voluntary blood donors save millions of lives annually, blood transfusion services globally are continually challenged to ensure sufficient supply and constant replenishment as blood and blood products have a limited shelf life. The importance of blood donation cannot be overemphasized - best illustrated by a real-life story where one of our members required multiple blood transfusions and how we supported them.

A member suffering from metastatic prostate cancer has surgery to repair a broken leg sustained after a fall. After surgery he requires a blood transfusion based on low blood levels, which is not uncommon for this type of procedure. A week later, during his rehabilitation stay, his blood levels are low again and, with his shortness of breath, paleness and lethargy, it is noted that he is symptomatic of anemia. Likewise, during surgery recovery he requires a total of 10 units of blood. It is at this point that he contacts MediGuide (our medical second opinion partners) for information and guidance on managing his acute anemia.

His case is reviewed by a leading hematologist who identifies that our member likely had *chronic anemia before his injury/surgery because of his prostate cancer. While there is acute blood loss during surgery that contributes to his anemia, the hematologist identifies that red blood cell production was disrupted because our member’s cancer had spread to the bone. In addition, he notes that hormone changes associated with prostate cancer together with radiation treatment, which the member previously completed, can cause anemia.

The hematologist recommends additional blood testing to better determine if the blood loss is related to an acute injury or a chronic condition. He also recommends further evaluation and testing to rule out blood loss from another source such as bleeding in the stomach. If testing reveals chronic anemia, he recommends that our member follows-up with his treating oncologist to discuss: the potential for injections to help promote blood cell production and to assess his current hormone treatment regimen. The hematologist does not feel that our member’s blood levels are unstable and agrees with ongoing monitoring and, if the member demonstrates any symptoms associated with anemia such as shortness of breath or cardiac issues, recommends blood transfusions.

Our member and his family appreciate the information, stating that without the MSO they would not have associated the advanced prostate cancer as a contributing factor to his anemic status. After being discharged from the rehabilitation facility, he shares his medical second opinion report with his oncologist. Follow-up test results rule out an acute source for his anemia, corroborating his second opinion review.

What to do next

Donate blood: With most countries struggling to meet current requirements for blood, you can donate easily and safely. One unit of blood can save up to three lives. All it requires is an hour of your time to help someone injured in an accident, battling a blood disease or undergoing cancer treatment.